Symposium Bio 2021: An Agenda to 2050 for Sustainability and Sustainable Consumption

This year FiBL, bionetz.ch, Bio Suisse, Demeter, IG Bio and bio.inspecta have again organised the Symposium Bio in Bern, Switzerland. The 3rd symposium was held in the Kursaal congress centre on 18 November 2021.
The main focus of the event was on “Organic consumption as part of environmentally aware shopping”, but other issues were also addressed: “Can growth and sustainability be combined?”, “How can organic food be promoted in the catering trade?”, “What do the latest organic barometer figures show?”, “What changes are being introduced in the new EU Organic Regulation?” The numerous visitors learnt about the latest developments in these areas and joined in the discussion of them.

Christine von Weizsäcker, the well-known campaigner for biodiversity and against genetic engineering, opened the symposium with her presentation on “Agriculture and sustainability”. Since the first United Nations Conference on Sustainable Development in Rio in 1992, Christine von Weizsäcker has acquired an international profile and she was nominated by women’s organisations worldwide to represent them at the Rio+20 summit.

The 17 Sustainable Development Goals were adopted by the United Nations General Assembly in 2015, but the various ministries, sectors and states have focused on different aspects in implementing them.

At the end of her presentation, Christine Weizsäcker summed up her main points as follows:

In conclusion, Christine von Weizsäcker pointed out that these goals can only be achieved with the involvement of everyone along the main interfaces.

The limits to growth

Irmi Seidl, professor at the Swiss Federal Institute of Technology (ETH) and the University of Zurich and head of a research unit at the Swiss Federal Institute for Forest, Snow and Landscape Research (WSL), showed in her talk that growth – that is “more of more” – has in the case of many agricultural products been achieved, if not exceeded. Further growth is not possible without the use of chemical and synthetic agents, which have a detrimental effect on the environment. Professor Seidl therefore emphatically recommended amending the direct payments system for agriculture. The payments should not be cut, she said, but should be channelled in a different direction.

She ended her talk by quoting Viviane Forrester, an internationally acclaimed economist: “One of the biggest management problems is the fact that in many international companies success is only measured in terms of growth.”

In the subsequent podium discussion, expertly chaired by Daniela Lager, Christine von Weizsäcker and Irma Seidl were joined by Clemens Rüttimann, CEO of Biotta AG, and Manfred Wolf, an organic vegetable grower from the Seeland region and chairman of the board of Terraviva AG.

In the afternoon workshops, Ursula Kretzschmar and Hanna Stolz, both from FiBL, reported on the changes to the EU Organic Regulation and the consumption figures in the latest organic barometer. Reto Thörig of Bio Suisse outlined ways to promote the sale of organic products in the catering trade.
We are already looking forward to co-organising the next exciting Symposium Bio and we hope to see you there. 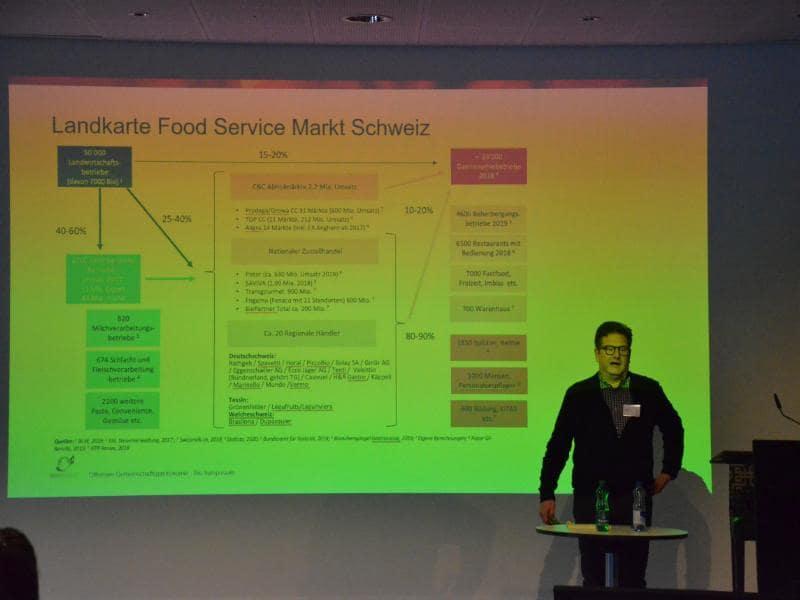 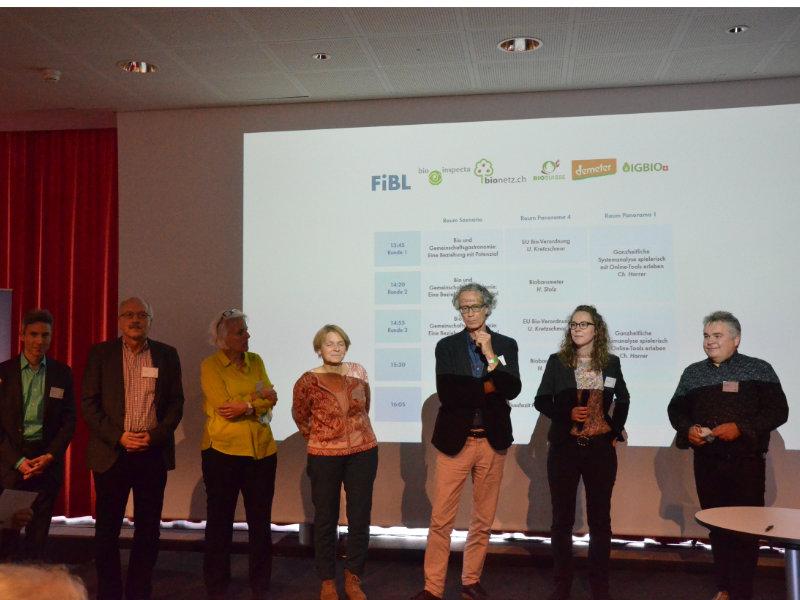 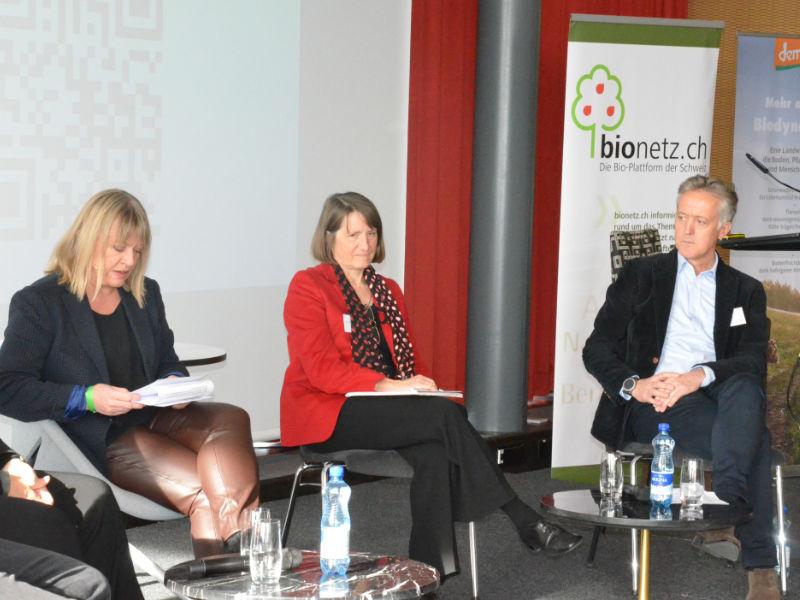 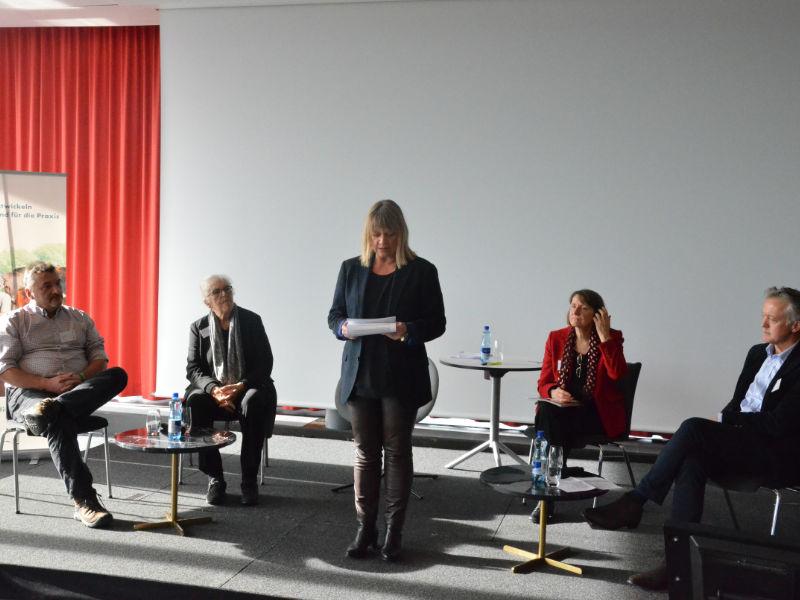 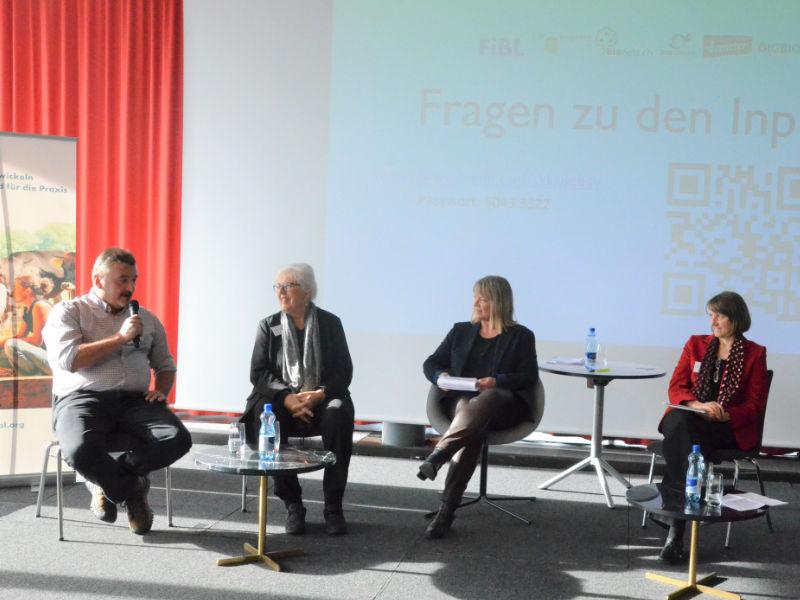 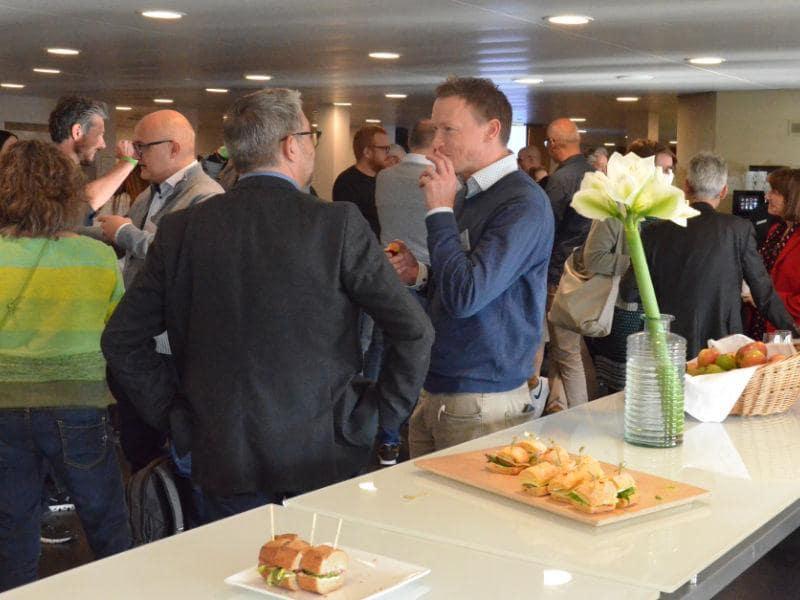 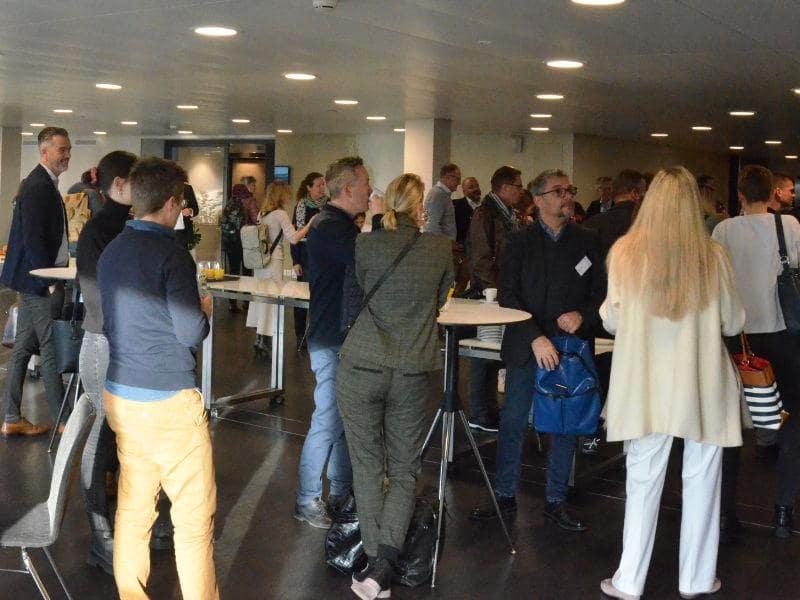 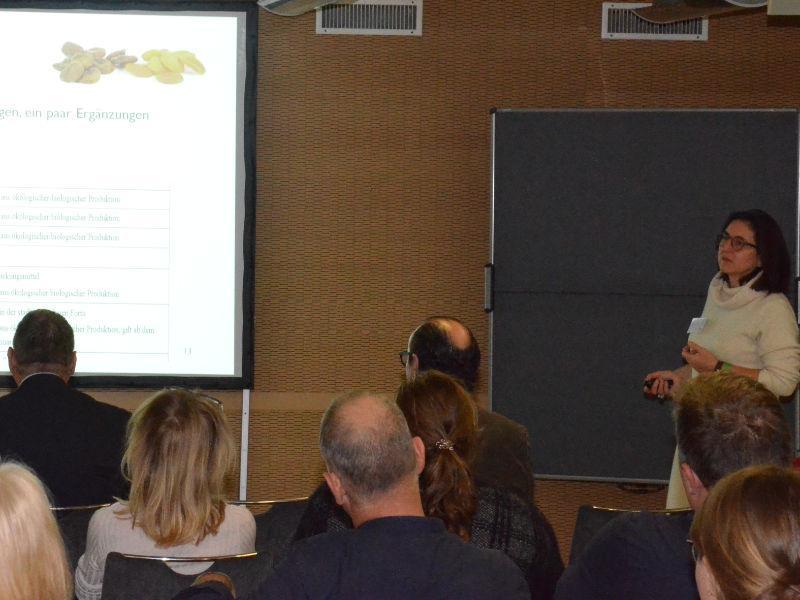 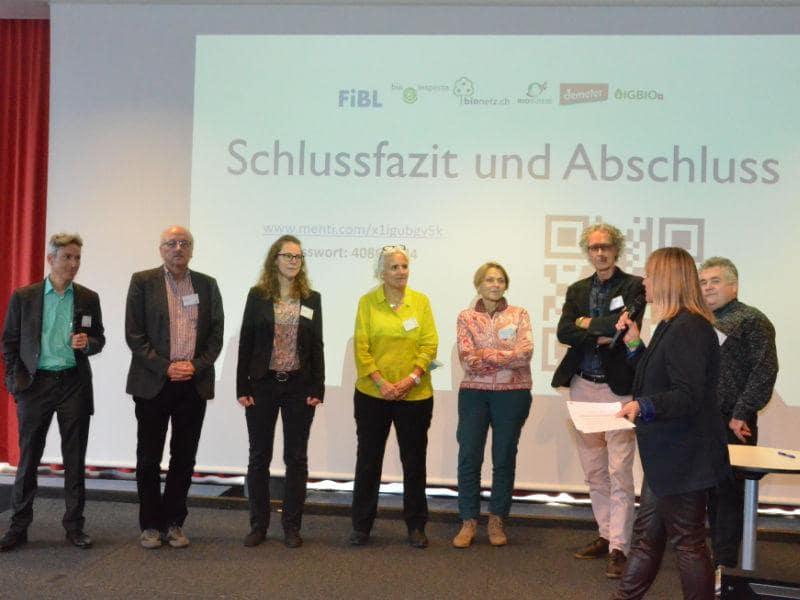 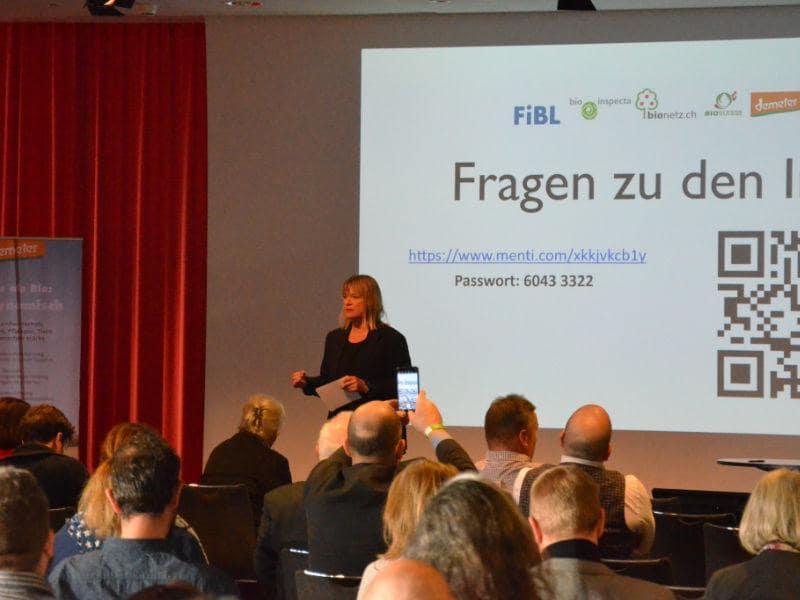 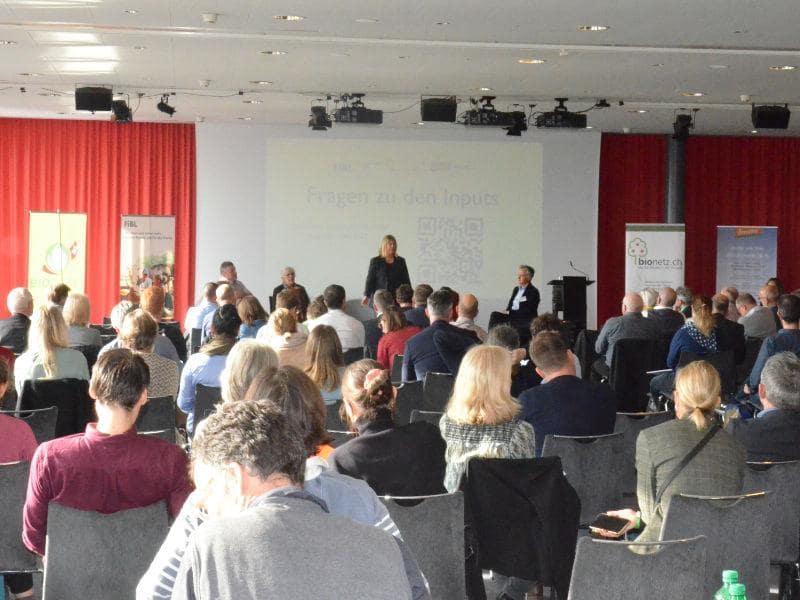 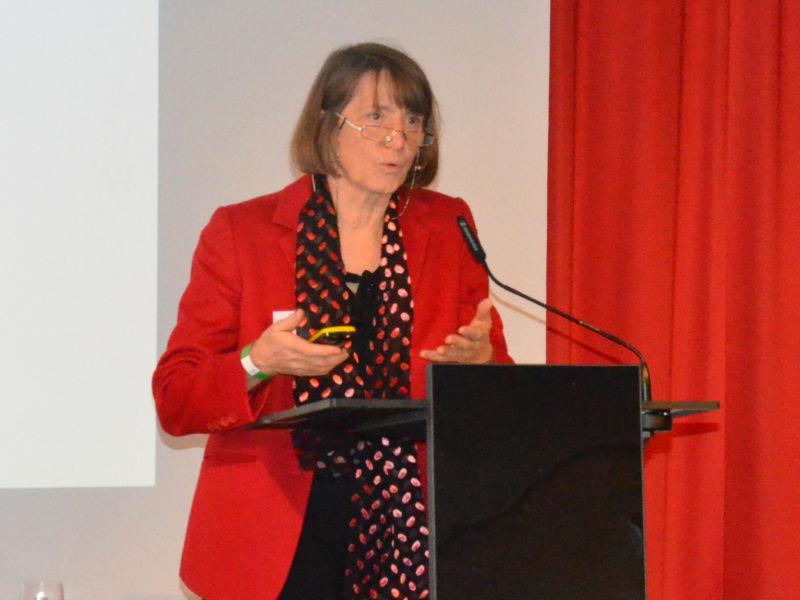