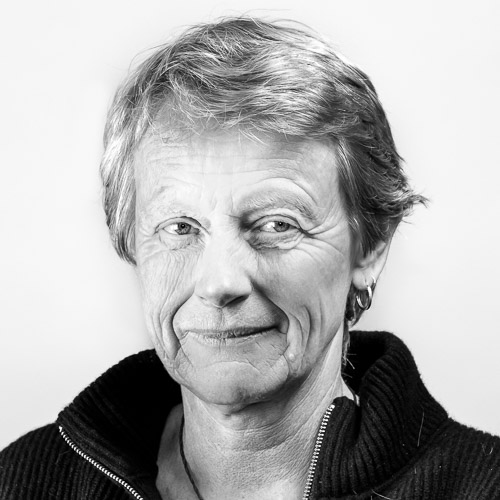 She has been an organic inspector for 20 years. At the end of May 2022, far from taking retirement, Martina Schneider is returning to alpine farming. A conversation about self-reflection and the role of women in agriculture.

Martina, you were an organic inspector for 20 years. I’ve been told that you carried out around 2,300 inspections during that time. Be honest – are you fed up with it?
No, I wouldn't put it like that. As with anything, there are two sides to my decision. I know I‘ll miss being in contact with the farms and the people who manage them. That‘s what has always fascinated me. On the other hand, I‘m simply looking forward to something new!

Well, I’ve still never met a child who dreams of becoming an organic inspector. And you started out by qualifying as a psychiatric nursing assistant. So what happened?
After my apprenticeship, I spent a few summers on the alpine pastures. That's where I caught the farming bug. I went on to complete a second apprenticeship as a farmer and did a year’s work on a farm in the Jura before I was able to take on my own small farm.

As it was just a small farm, I was looking for a second job that was viable alongside the farm and family. Being a woman in agriculture and not having a degree made the search twice as challenging. The organic inspection job was a really good fit. The inspections can be scheduled flexibly, which is ideal! So after the birth of my first daughter, I took up the inspection work.

So 20 years ago, you became one of the few women conducting organic inspections in a male domain. How did you battle your way through it?
Well, I’d already made the move into agriculture and alpine farming at an earlier stage, so it was familiar territory. I went in without much forethought and simply got on with it. But I did sense a certain resistance at times, for sure.

What made you aware of that resistance?
It came up in various situations. When I introduced myself on the day of an organic inspection, I always told them that I ran my own small farm. This would often prompt the question, “So who operates the machines on the farm?” Or sometimes when I phoned to inform them of the inspection date, farm managers would want to know the name of the inspector who’d be coming. They thought I was the secretary.

But there were nice reactions as well, and any number of farms where they were glad to see a woman doing inspections at last.

In recent years, though, the resistance has almost completely dissipated. Probably because we now have more women in the team – and more women in agriculture generally. That has made things easier.

Many farms tell me that compared to now, inspections used to be more unpleasant. Nowadays they feel that inspectors meet them on an equal footing and work with them to clear up any faults found under the organic regulations. A lot has changed! Is that partly to do with the growing influence of women in the inspection system?
It probably has most to do with the professionalisation of the inspection system. Inspectors are now trained in social issues as well, which they weren’t in the early days. The farms have evolved as well – more and more farms are managed by women, which is changing the whole setup. The crucial point, I think, is that I‘ve always taken my counterpart seriously – regardless of their gender. In my view, that’s the most important factor.

Your employer bio.inspecta has long been a believer in innovation. For example, since 2014 the inspection dossiers have been digital only. How have farms changed during this time?
Farms have definitely become more innovative, too. Many farms are using tools like Barto to digitalise their data, and they‘ve certainly had more data to handle in recent years. Younger generations often carve out new paths and are increasingly exploring alternative production methods and marketing channels. They seek contact with their consumers, which I think is great.

In early summer, you’ll be returning to the alpine pastures. Looking back, you seem to have taken away lots of positives from your demanding work as an organic inspector.
Absolutely! The challenge of conducting a farm inspection as a neutral person wasn‘t always easy. But on balance, the positive experiences outweigh the rest by far! I always found inspection work very enriching and instructive. Looking back, that moves me to thank all the farmers for their openness and trust.