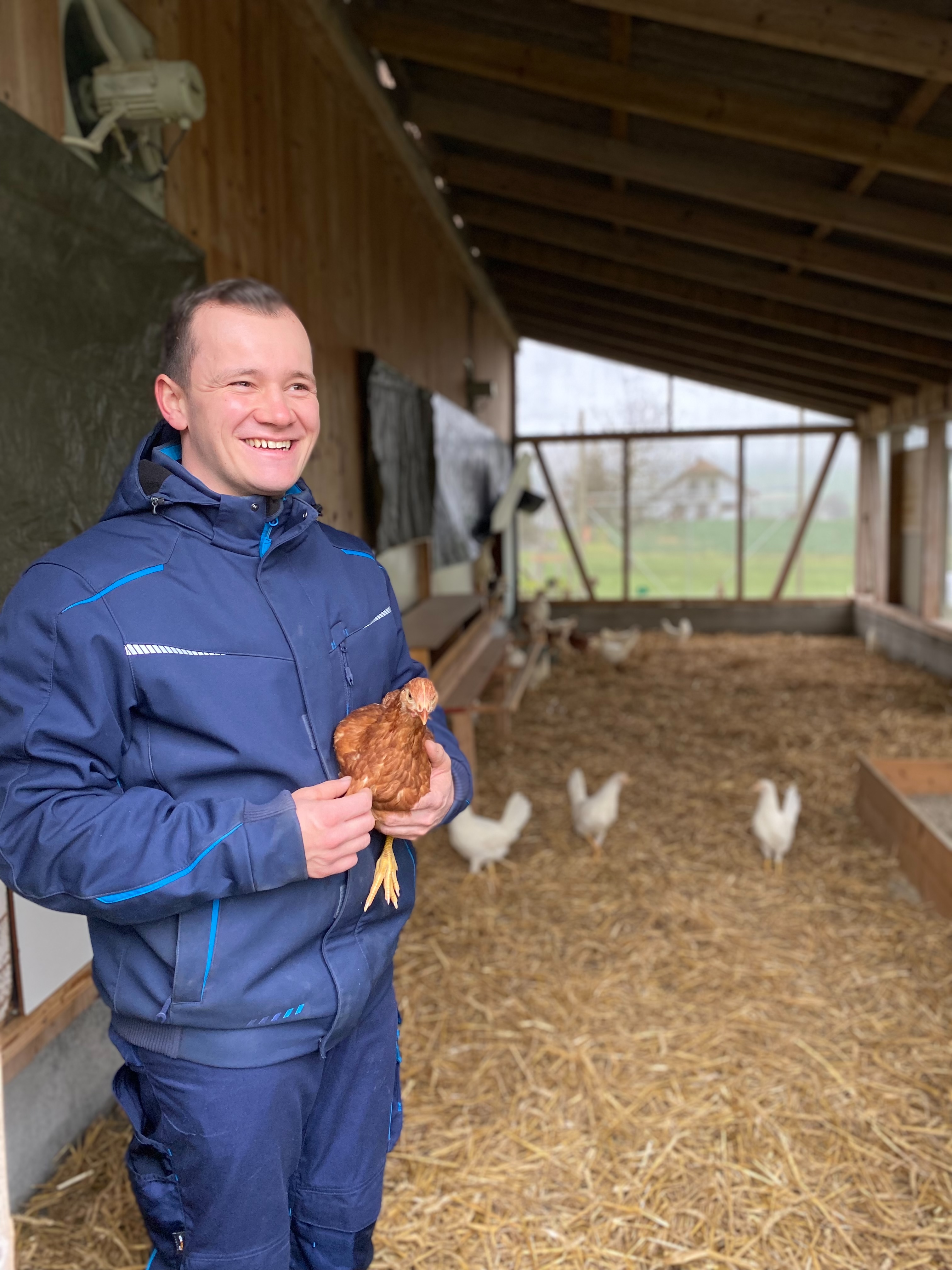 In a year's time, Stefan Scheuber will take over his parents’ leasehold farm. Frank discussions and foresight allowed him to make future-oriented decisions prior to the transfer and convert the farm to organic production.

The Scheuber family has been farming the leased holding just outside of Grosswangen for almost 10 years. It includes about 30 hectares of land, of which roughly 9 hectares are under tillage. The family also manages three hectares of forest. They currently keep about 40 dairy cows, including their own replacements. A further enterprise comprises 500 laying hens and 4700 pullets. A proportion of the pullets are sold directly from the premises.

The farm is currently managed by Stefan, his parents Kathrin and Josef, and a vocational apprentice. Moreover, the farm offers farm worker training for apprentices with additional needs (Stiftung Landwirtschaft und Behinderung - Agriculture and Disability Foundation). This position is currently held by a young man.

A variety of motivations
The idea of converting the farm to organic production had been on Stefan Scheuber's mind for a long time. At the same time, farm succession had to be addressed. Kitchen table conversations made it clear that nothing stood in the way of converting to organic production prior to taking over the farm - Stefan's parents showed interest in the idea.

Stefan Scheuber, who has always given a lot of thought to the future and optimisation of the farm and its workflows, clarifies that «our diverse farm is predestined for organic agriculture. In the organic segment, smaller quantities are also in demand and short-term decisions can be made. So it also makes economic sense.»

At the photo shoot with the pullets, however, Stefan Scheuber mentions yet another reason: «In addition to economic considerations, the conversion to organic production is also a step forward on the agronomic front. I am very interested in the different handling of animals and plants!»

Practical preparations
Stefan Scheuber first came into contact with organic farming during his agricultural apprenticeship. At that time, the large and diverse farm on which he was training was undergoing conversion. «It was an exciting experience that stands me in good stead today,» says Scheuber.

After his apprenticeship, he worked as a farm assistant on a number of holdings, some of which were under organic management. In addition, Stefan Scheuber continued his education, training as an agricultural technician at a higher technical college. The final basis for the decision to convert to organic production was the organic farm check offered by the organic inspection body bio.inspecta. During the farm visit in December 2019, the last outstanding questions on the organic standards and their practical interpretation were clarified.

Unforeseen challenges
The farm has been in conversion since January 2020. «In retrospect, the two years of conversion proved very challenging at times,» says Stefan Scheuber. He is referring in particular to the hailstorms, which caused a lot of damage in both those years, damaging not only crops but also farm buildings.

In addition to the not so nice moments there were also many brilliant ones. One of these was the construction of the new 4000-bird pullet rearing house which brought the farm a crucial step forward. With Covid19, the existing houses for the direct sales of 700 pullets had quickly been cleared out anyway. Stefan Scheuber is still amazed to this day: «Suddenly everybody wanted to keep chickens. We were chronically sold out!»

With the new barn, entire layer houses can now also be stocked. Marketing and organisation are handled by a regional partner.

Currently, the farm is mainly concerned with the new Bio Suisse feeding standards, which require a reduction of concentrate feed to 5% of the ration. Stefan Scheuber is optimistic: «With maize, good quality meadows and consistent weed management, we can produce good base rations.» With adapted stocking rates, the farm ensures a closed nutrient cycle, using only its own livestock farm waste.

Looking ahead with confidence
The past two years have been characterised by challenges, diligence and innovation. Looking ahead to the future and the takeover of the farm, Stefan Scheuber would like to address one issue in particular that many farms deal with – the farm’s sustainable advancement. «I am currently evaluating the options, but there is still time for that,» says Scheuber with a view to the upcoming farm transfer.

From 2022, the farm will be fully converted and all products will be certified with the full Bio Suisse Bud label. In addition to cereals and eggs, he will also be able to sell Bud-labelled milk. «We will have come yet another step further!»